And..action! Earlier this month work had begun officially on the Film Row streetscape project along Sheridan Avenue, just west of the Myriad Gardens. Historic Film Row is an up-and-coming district of former film warehouse buildings that are being restored on the west edge of downtown. It's an area that stands to gain a massive boost from the Devon Tower project.

Work may finally be moving forward on two projects, the Film Exchange Building and the Hart Building. Two projects that already look nice are the Oklahoma Theater Supply and an upscale home decor store whose name escapes me. The developers behind the rebirth of Film Row maintain a website with more information here. The progress is pictured below. 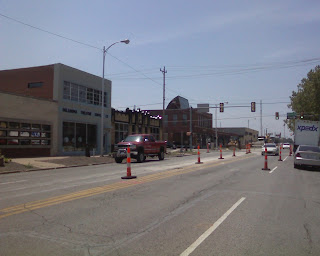 Might I offer an alternative site with a lot more info on the new Oklahoma City Film Exchange District?

Just came across your post and wanted to add another source for info. I've been involved with the area as a founding member of the district.