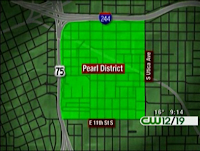 While OKC has Core2Shore, Tulsa is developing long-term plans for a neighborhood that has the potential to rival private development in OKC's C2S area. It has no NBA arena, no artificial waterfront, no convention center, and no Big Dig. It does have a Central Park (in fact that's the actual name of the park), even though it's much, much smaller than the yet-to-be-named central park plans for Core2Shore. It does call for alternate civic investment however.

The Pearl District's main organizer, developer Jamie Jamieson, has been talking to city leaders about what must be done to make this neighborhood Tulsa's version of Bricktown. You might not see it, but many visionaries definitely do. Recently finished plans call for moer improvements made at Central Park, a new canal, and an extensive pedestrian streetscape. Some streets may even be closed to vehicular traffic in order to foster the best pedestrian environment.

In all honesty, this is really a "bare-bones" revitalization proposal. The canal is absolutely necessary because the entire low-lying area is in a flood plain. There will be no development, period, without the canal.

The streetscape is necessary because the roads are completely crumbling and sidewalks are all torn up. The sidewalks are going to be necessary because we can not build a decent urban neighborhood without putting focus on the pedestrian environment. Blair Humphreys has an entire blog practically devoted to walkability in Oklahoma (a good read), which is not very good. Last year out of 500 cities ranked for walkability, OKC came in dead-last and Tulsa came in at 409. The Pearl District is going to be Tulsa's answer to the pedestrian crisis in Oklahoma. You may be asking, what makes this different from other areas in Tulsa? Downtown Tulsa? Brady or Blue Dome? Cherry Street or Brookside? Even Uptown? The difference is that this is going to be a new urbanist neighborhood, whilst the rest of Tulsa's "urban" neighborhoods are just urban by 20th century standards. You still really need a car in order to navigate Brookside, and Uptown doesn't exactly scream bold modern architecture. In fact, I'm not quite sure what kind of architecture Uptown is supposed to be (other than something severaly in need of renovation).

But is it for real?
The bottom line for these types of visions is execution. We've seen especially in Tulsa that planners can dream and dream and nothing will ever happen. Along 81st Street (yep, not 71st Street) there are rumors of former plans of an actual monorail system linking 169 and the Oral Roberts/CityPlex development. OneOK Tower was supposed to be 60 stories tall. We all remember the Tulsa Channels, the Greenwood chamber's redevelopment proposal, Franklin Square, the proposed high-rise Westin on the Towerview site, Global Development's huge East End proposal, and the list goes on and on. I even have a post dedicated to failed Tulsa proposals, where I start out borrowing a line from Vegas: In downtown Tulsa, what happens on the drawing boards, stays on the drawing boards. Clever, right?

The Pearl District however, is for real. We know this not because Mayor Taylor has shown interest in helping (definitely not from that), but because there is actual development going on in the area right now. Jamie Jamieson is building The Village at Central Park, which is a large community of urban brownstones being built in piece-meal style (so far about 50 built, but many more planned). Pearl Place is a historic warehouse being renovated into a retail strip (this project was actually designed by an architectural firm that recently relocated to the Pearl District).

Neighborhood organizers along with city planners just finished the masterplanning for the revitalization push that is about to be underway. There is no funding yet for these proposals, but we may see the Mayor's office come up with something. The project has had it's fair share of press, from the Tulsa Whirled and news channels. There may be too much community involvement for the plans to get shelved at this point, and unlike with other proposals, nobody is speaking out about how horrible the proposal is. Perhaps they've uncovered a winning plan to muster public support for winning back the inner city: muster urban activist support and efficiently organize supporters long before anything ever goes up for a vote. As opposed to the failed Randi Miller/Bill LaFortune plan: just randomly announce a plan, tell people "Oh, and this is going to be voted on tomorrow," and let the two sides battle it out and call eachother names until it fails and people in OKC laugh at how sad Tulsa is. No pearls of urban widsom in that.

What the Pearl activists have put together is a package probably designed with suburban opposition in mind, and they've clearly outsmarted it. The canal can be stuck on a ballot and labeled "flood detention project, east Tulsa" which would have a higher likelihood of passing than "Pearl District urban tourist canal." A whole streetscape, even a pedestrian mall could just be stuck on a ballot labeled "road improvements, E 6th Street and Peoria." No need to get too specific, you might offend someone from South Tulsa, or City Councilman Roscoe Turner aka Really Old Dude on City Council.

While they can make these proposals seem modest, you be the judge. Here are the actual renderings I snapped from a newscast last week. 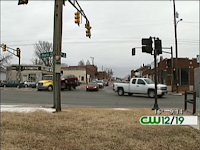 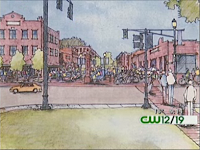 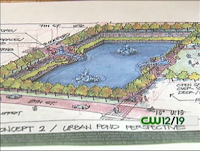 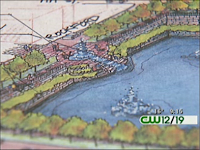 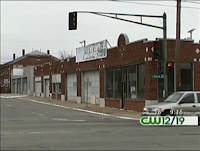