We've said so much about what it will take to get downtown retail on solid footing. I've exhausted the current state of retail as well as any and every study that's every been done (and ignored). What if we could get well-established local retailers to come downtown, like it once was? I think that is going to be by far our best bet for bringing downtown retail back. Well-established local retailers have already built up a reputation and a loyal customer base, so they would not have the burden of having to establish their own business and a new market at the same time.

As Marty Dillon moves forward with renovations to the Tower Theater in Uptown, there is also the likelihood that he will move his longtime family-owned MG Novelty party store to the storefronts attached to the Tower Theater--which would be a huge boon for Uptown in addition to to the theater which will be a multi-use events center. There is also an emerging retail area developing in Bricktown where Oklahoma Avenue crosses the Bricktown Canal--we've recently seen the opening of the Bricktown Candy Co, Peachwave Frozen Yogurt, and the Red Dirt Marketplace, and Envy possibly moving across the tracks--joining the existing stores like the Red Dirt Emporium and Put a Cork In It. Here you will have 6 possibly more retailers in the same block. If retail takes over the languishing Bricktown Canal area (which has gone slightly downhill while the rest of the district has made huge improvement) it will go a long ways toward putting a retail foothold back in downtown.

So, is anyone in the mood for a slam dunk for downtown retail? What if we could get Full Circle Bookstore to move downtown? We all know 50 Penn is being abandoned by all of its respectable tenants and we expect Full Circle to be no different eventually. They can't be the lone holdout in what has essentially become an upscale Crossroads, they need to start thinking about relocating, and I am sure they're already on top of it..who knows, they might even be in talks already with Chesapeake for Classen Curve Phase 2. Personally though, I think Full Circle needs to buck the trend and avoid going to Classen Curve like everyone else. Full Circle NEEDS to do something outside the box in order to maintain its unique identity, and I can't see Rand Elliott preserving that. Full Circle needs downtown, not Classen Curve, not anywhere else. The advantages that downtown and only downtown can offer Full Circle are as follows:

1. The appearance of a legitimate bookstore in a building that looks comfortable and "worn in."
2. Proximity to an emerging demographic of young professionals calling OKC home instead of fleeing from here.
3. Proximity to OCU and the thousands of college students that will study in downtown within a few years (OCU Law, ACM, OBU MBA, etc).
4. Following the example of the other examples of great bookstores..Elliott Bay Book Co in Seattle, Powell's in Portland, Harvard Book Store, Book People in Austin, and so on. This could get Full Circle on lists of greatest bookstores.
5. The opportunity to be at the center of the community and trailblaze the return of downtown retail, and benefit from being first to the scene.
6. Better proximity to all of the affluent areas of OKC, including SW OKC and Norman, not just the north side. There is not a single bookstore between downtown and Norman, despite tons of affluent and educated areas. 73170 is highest income ZIP code in OKC metro.
7. How could you pass up the potential of the following building: 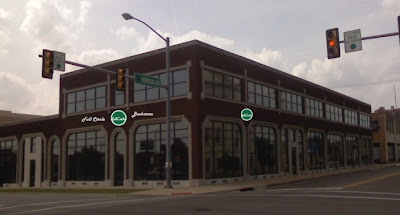 And it would be across the street from this: 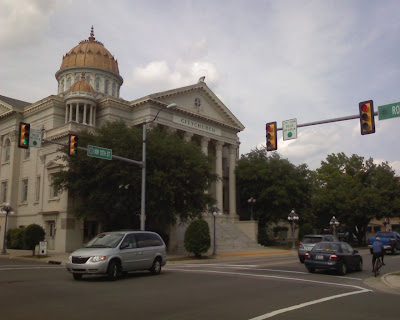 I think Full Circle CAN sell some books here, if you ask me. I think this has potential to be incredibly successful. Downtown OKC Inc needs to bring everything they've got to the table in order to lure Full Circle. The MidTown Redevelopment guys need to do whatever it takes to make it happen. Downtown enthusiasts need to mount a good email campaign to Full Circle. Full Circle shoppers need to mention it to them every time they are in the store.
Posted by NR at 3:10 PM

What is their email address? Have you gone into the store and talked to them? This is such a great idea.

What happened to Jane Jenkins? Have you ever talked to her?

As for Jane Jenkins, she's still employed, still in OKC. And we still have no retail.

Plan on trying to get a hold of Jim Tolbert just haven't gotten a chance yet.

I love it!!!! What a great idea. Do you remember that bookstore on 50th and Mayish....It had an Owl on the sign. I think they have gone totally to online sales, but they would be great downtown if FS doesn't jump on the opportunity!

For what it's worth, Jim Tolbert is aware of this post, and has had calls and emails to the store. I can only describe his response as not annoyed, amused and cheery.
- Steve

I've been out of the local blog loop for a little bit, but I came across this post and it really struck me. I'm so excited about this suggestion.

It also brought something to mind for me. When Indianapolis (the city closest to my hometown) started its city center revitalization, planners and citizens tried desperately to get an independent bookstore to make the move to downtown and capitalize on all the affluent people in the area who read extensively but who got their books online (or from the downtown library) for the sake of convenience.

There was much dithering and in the end, Borders opted to locate downtown. (http://www.ibj.com/ext/resources/blog/propertylines/uploads/2009/02/downtown-borders.JPG)

That's not unique. That doesn't contribute to the character of the city. And that Borders is in financial trouble because, when it comes down to it, there's no customer loyalty to a Barnes and Noble or a Borders. Something like that can't lure away shoppers who purchase their books online.

Now, I'm not suggesting that a chain bookstore is going to locate downtown. Retail development is almost nonexistent and Oklahomans haven't a national reputation for being a particularly bookwormish people, but I am saying that I love your suggestion because the power of an indie bookstore's name and base could be just what can make it a success. It could be iconic! Oklahoma City's downtown bookstore!