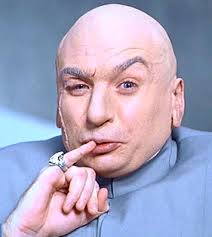 I'm having trouble understanding the current Ward 2 council race right now. Has there even been such a big-money council race in OKC's history?? The total amount being spent on this one inner north side ward is in the ballpark of a HALF MILLION DOLLARS. The "Committee for Oklahoma City Momentum" has pumped $409,000 into the races, a disproportionately large portion of it ($166,000) on behalf of Charlie Swinton. Charlie Swinton himself has directly pumped $104,000 of his own money into his campaign, and raised other contributions as well.

That's $270,000+ for ONE candidate in this race. This coming from the candidate who earlier in the race said, "When you are in a race with someone who has unlimited resources, you've got to keep running, and I don't have those kinds of resources..." His opponent is local doctor Ed Shadid. Dr. Shadid's campaign has raised $78,000. Perhaps Shadid should have made the poverty plea instead?

Another bone to pick with Swinton. It is absolutely impossible to get in contact with him, and I'm not alone in feeling that way. M3 Streetcar Subcommittee member Jeff Bezdek attempted to get in touch with Swinton after he made some disparaging comments toward rail. Swinton declined to meet this esteemed community member, who has been a very important person in the MAPS 3 process. Others have found it impossible to talk to Swinton, unless you come with a check in hand. I haven't been able to even load Swinton's website, and on his Facebook he has no contact info. He is un-reachable.

Not only does Dr. Shadid have contact info on his website which is perfectly accessible as well, but Shadid actually emailed me last month. He wanted to have a chat over coffee about issues facing the city, and talk about issues of urban planning, walkability, sustainability, and quality of life I assume. Not only did he say he was interested in these issues but he said he likes my blog. OK, well that was awfully nice of him, although I imagine he is way too busy right now to spend time reading a blog for crying out loud. I don't even know if Shadid really does read this blog, but given the way I see the "real" issues facing OKC, even if he just saw the blog and contacted me I think that says a LOT about how he sees the issues facing OKC.

So while Swinton is un-reachable, Shadid is extremely reachable. That's good in someone who is running for council. If you can't even reach a candidate, imagine how they will ignore the citizens once they're in office?

A third bone to pick with Swinton: Mudslinging. Shadid has ran a campaign arguing for more sustainability and actually producing innovative ideas. Often they are ideas about how to improve OKC's sustainability. Swinton has meanwhile used this to portray Dr. Shadid as some Green Party terror activist-extremist person, "Too extreme for Oklahoma," and the works. A very typical, unimaginative, and tired campaign line. Dr. Shadid is none of these things. In fact, Swinton took a $1,000 check from the esteemed State Representative Al McAffrey, the only openly gay representative in the state house. The Campaign for OKC Momentum is a chamber front whose goal is move the convention center up the list of MAPS3 priorities at the expense of other projects. Just calling a spade. If anything, Swinton is "too extreme for Oklahoma." And I like McAffrey, he's a cool guy that just represents his district. I like the Chamber a lot, their hard work moves OKC forward. Just pointing out how hypocritical Swinton is with his politicizing of the ward race.

Maybe that's just a poster you don't want to stand in front of, but I think it's refreshing to see someone actually "stick up" for the greenies. I would also point out that the outgoing Ward 2 councilman, Sam Bowman (who is extremely well-respected), also has a picture taken in front of a Sierra Club poster. Was Bowman "too liberal for Oklahoma" ?? What does that even mean for a CITY COUNCIL race?

It's just sad that politicizing these things often works. Look at how Mayor Mick won his first election, in a race that was Jim Tolbert's (Full Circle owner, Bricktown developer) to lose. Cornett blasted him as being an "old liberal crank" and surged to victory. This plays out time after time...
Posted by NR at 3:05 AM

Thanks, I appreciate it, Doug