2. Lay the foundation for private industry growth in OKC, where 1 in 5 jobs are government jobs. What OKC needs badly is economic diversification. This doesn't come by shirking economic development opportunities. When the opposition lies to you telling you that MAPS 3 is just "big government" keep in mind that the ultimate goal is to encourage private investment. The success of MAPS isn't measured in how nice the new facilities are but how many projects and jobs it creates. How many times have you heard people lamenting how OKC is nothing but oil and government? Let's change that. Let's continue the economic growth and economic diversification we've been going through over the last decade!

3. Embarrass the Stimulus. The Stimulus does not work because people in Washington, DC do not know what needs OKC or any town has. Even if they knew what projects the people in Pittsburgh and Minneapolis supported, here in OKC we got nothing from the Stimulus. Is there a guarantee the Stimulus will work? No, in fact precedent is way against it. Precedent is however in favor of MAPS. If you want to make a political point against government waste and pet projects, vote for MAPS. Let's prove a powerful point to Washington: special projects are best left to local leaders NOT distant politicians.

4. Take pride in OKC's top-notch amenities and facilities. Because of MAPS 1 we have an NBA team and the arena that we would later complete would become one of the best arenas in the NBA. The Bricktown Ballpark has been named baseball's best minor league stadium several years. The canal is a unique-to-OKC urban environment that we continue to build on. The downtown library, the Civic Center, so on and so forth--these are facilities that have inherent value to us. When we brag about OKC, these are the things we brag about. MAPS 3 will add a modern downtown streetcar system, one of the nation's top convention centers, a brilliant downtown park, and more. These are the things we'll be bragging about in 10-15 years.

5. A boost in downtown investment. MAPS 1 was $360 million and resulted in $5 BILLION being invested in OKC. It's much like typical investing strategy: if you're smart, you can strategically turn a small amount of money into a huge amount of money. The impact of MAPS has obviously been far greater than ever anticipated, the reason for which, is that OKC leaders didn't anticipate that urban cities would become trendier than suburbs. Current studies indicate that the spark in urban growth has just begun and that inner city markets are in fact the most promising real estate sectors, which guarantees our MAPS 3 investment will be just as successful as MAPS 1. The #1 development impetus will be the streetcar. Streetcar routes through downtown will light up with infill development and property values will soar, much like land along the Bricktown Canal has. Downtown living will become more affordable because with more development, there will be more options in housing, and each development won't have absolute control over its own market niche. It will be a consumer's market, not a developer's market.

6. Bring in more events to OKC, conventions, river events, etc. Because of MAPS 1 we have created a center city where there is always something to do. Every night there is either an NBA game, a concert, a ball game, a symphony, art showings, festivals, big speakers, rallies, regattas--you name it. Not a day goes by without events in downtown. The MAPS 3 facilities will also be geared towards adding more to that. The MAPS 3 convention center will host events, such as outdoor concerts and music festivals at the amphitheater lawn overlooking downtown. The convention center will triple our convention business. The river improvements will bring in more regattas, Olympic events, etc. The artificial white water rapids will add another element to the river scene. The expo center will help attract more serious trade shows to the Fairgrounds. The trail network will give us a safer route for marathons.

7. A healthier community. All of these MAPS 3 initiatives are designed to transform OKC from the most car-dependent, chronically-obese metro in the nation (which is statistically proven) to a healthier and more sustainable community. The streetcar will encourage people to live without cars in the center city, and by walking from place to place, downtowners will be in much better shape than suburbanites. The trails will build on what has been a good start, and will be utilized as well as the Hefner trails have been. This will give suburbanites the opportunity to be active. The park, which will be unlike any other park in Oklahoma (a true urban masterpiece), will be 'the' place for recreation in the metro. There won't be any environment like it. The senior centers will help our seniors stay active, which is important considering how the aging population is fixing to balloon. These initiatives are all vital toward making OKC a healthier community. Starting a website and subtly encouraging citizens to do their "civic duty" and lose pounds isn't cutting it!

8. Get more out of downtown aside from 'events' -- everyday attractions like the park, a more sophisticated downtown, parking made easy due to the streetcar, and so on. These projects will combine to create a more people-oriented downtown. You will be able to bring a date, bring your family, or come alone and enjoy the environment of downtown, not just the establishment you're paying a visit. What I mean is that a trip to McNellie's won't just be a trip to a cool pub, but you'll also have the "MidTown experience" alongside. Each neighborhood will be a unique experience, as each neighborhood will have an impact from MAPS 3. 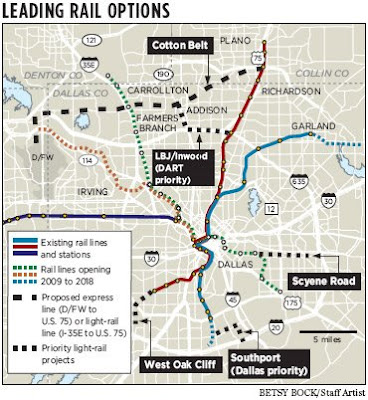 9. A foundation to build on for the future. The streetcar in particular, which is to be developed alongside a multimodal transit center, is designed to be the beginning of a full-fledged mass transit system similar to what is down in Dallas. The streetcar is a practical beginner project that we'll get a lot of use out of. Once we have laid the foundation for rail transit in OKC we will be able to apply for federal funds to build a light rail system across the metro, that will enable commuters from Edmond to Norman to park (or bike) and ride to downtown or anywhere else in the metro. Why should OKC not have EVERY amenity that they have down in Dallas? Is Dallas known for being a particularly progressive place? No. OKC is a large city, the year is 2009, there is no reason why OKC should not have cutting edge infrastructure too. MAPS 3 is a foundation to build on for the future because for the first time ever, we aren't catching up. We're being proactive and getting the ball rolling on how OKC will become the next great American city.

10. Raise OKC's profile. These projects all grow OKC's economy, build up OKC's role in several industries, particularly the real estate and convention trade industries, and could possibly lead to attracting other sports franchises. It's this simple: we grow OKC, more stuff comes to OKC, more people outside of Oklahoma have heard of/are familiar with... OKC. Want to change the fact that nobody really thinks about OKC outside of Oklahoma? Vote for MAPS 3. If OKC keeps investing in itself there's no reason why we can't be the next Seattle or Dallas.
Posted by NR at 9:27 PM

It's easy to score political points by criticizing the stimulus in Oklahoma, but it's also lazy thinking. The projects that it funded here were developed by state and local government, not handed down from DC. They may not be as glamorous as a park or convention center, but one glance at the list (http://stimuluswatch.org/2.0/performance_places/state/OK) shows plenty of useful projects that are also creating jobs. Not to mention that right now it's the only thing keeping our state budget from total fiscal collapse.

It may be true that the Stimulus has helped us complete a few infrastructure projects that were already planned, but it has not resulted in a single new project. That goes against the whole plan of the Stimulus, that everything was required to be shovel-ready.

A lot of Stimulus projects have made the picture even more complicated. Yes, it is money from the Feds, and that's always a good thing to get. BUT this time it came with strings, like requirements that labor be unionized, steel be American-bought, etc etc..that significantly raised the costs of the projects. So yes, it helped us complete the projects we had planned, but it also doubled the cost of those same projects. So go figure. The Stimulus could be a lot more efficient, a lot more transparent, and a lot more beneficial.. anytime taxpayer money is being expect that is what we should expect. The Stimulus doesn't quite stand up to the MAPS standard when it comes to that.