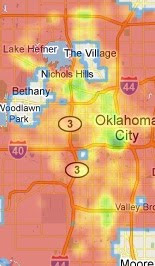 If anyone were to check out OKC's "walk score" on www.WalkScore.com, you might be somewhat surprised to see their map of the most walkable areas of OKC city limits. ^ Posted above.

Apparently the most pedestrian-friendly areas of OKC, after downtown, are Lyrewood Lane, NW Expressway/May, Western/I-240, Quail Springs, and Crown Heights. I presume this is pretty unscientific raw data where they just matched residential density to commercial density and decided that any overlay is "pedestrian-friendly." Still, I can kind of see where there are arguments for some of these areas. Lyrewood Lane might not be a "great urban environment" but that doesn't mean walkable.

While all of these urbanist buzz words are not mutually exclusive of each other, I think there is a novice misconception out there that where one exists they all exist.. "Walkability, attractiveness, urban design, density..blah blah.. it's all the same, right?"

Obviously some concepts are a lost cause for the majority of OKC. Try rescuing Lyrewood Lane from an urban design standpoint. Doesn't mean it doesn't have density, and it doesn't mean that it can't have walkability if you consider the concept loosely without assessing quality values (I for one wouldn't enjoy taking a stroll down Lyrewood Lane, let along driving down it, despite how accessible or plausible such a method of getting around may be).

True urbanism is urbanism without the snootiness and snobbery. We've had some awesome urban infill projects downtown, but they all cater to a certain income group. What is the difference between a gated community and residential parts of downtown? All that's missing is the gated entrance, because OCURA has been so proactive in keeping out anything affordable by, you know, normal standards.. (anything under $300,000 or $1,000/mo).

You act like if you drive down Lyrewood, you'll be shot at. I have a good friend who lives over there and I know the area well. C'mon, the exaggarations you make on here sometimes.

You have a good point. Ironic though, considering that the title and point of this post is to "throw out your demographic assumptions."

I didn't mean anything with the Lyrewood reference other than the fact that it's an area synonymous for Section 8 housing. I'm sure I-240/Western is also the same way.

I think it is really bizarre to think of anything along NW Expressway as "walkable". I drive that every day to work. There isn't one inch of sidewalk along its entire route. There isn't one pedestrian crosswalk between Classen and where it exits the city limits. Pedestrians are regularly killed trying to cross the Expressway. I've seen disabled people in wheel chairs dodging cars in the right hand lane.

Walkscore, more or less, simply maps the intensity of mixed uses (as you point out). This does signify a walkable environment in the macro sense because walkability requires destinations and activities within a given proximity.

However, ultimately walkability is only achieved if the very detailed aspects of the urban evironment are carried out through quality urban design, architecture, infrastructure, etc. This is what creates human-scaled environments that fulfill the social, psychological, and environmental needs of human users.

A couple links relevant to this discussion:

Bob, whenever I think of "rescuing" the NW Expressway and bringing it up to date in terms of aesthetics, walkability, and sustainability... I often think of Tyson's Corner, and in some other instances, Peachtree in Atlanta (the main drag). I think these existing cases provide great examples for how to upgrade a sprawlfest and auto-centric into something urban and people-friendly.

Blair, what's really interesting about the infrastructure required for something to be ultimately walkable is that it doesn't have to cost millions of dollars. I've seen the community in St Louis and Dallas create some great make-shift streetscape elements that do the trick in my opinion. For example, every intersection doesn't need to be redesigned and reconstructed with narrower curb-cuts (which encourage the driver to take turns slower) at a cost of millions, but all along Grand Blvd in St Louis' Shaw hood, they put porcelain planters that people in the community painted and decorated against the intersection crosswalks to shield them from autos. And so on..

Here's an interesting thing to consider. In Blair's second blog post he linked to, he talked about an article by Jan Gehl that I've linked to below. It's mostly about the importance of the street level's aesthetic, basically saying that anything above that doesn't matter and can be absolutely hideous and not affect walkability. I was considering how it can be applied to finding practical solutions for "rescuing" OKC from the automobiles and reclaiming OKC for people--and I literally could not feel comfortable applying any maxims that could be drawn from Jan Gehl to the 250ish urbanized square miles of OKC.

Does that mean it's hopeless, or are we just in uncharted territory, or is it saying that the entire city needs to get denser before we can even begin on pedestrian improvements in the first place? If so, that kind of brings a hopeless chicken/egg scenario..