It's going to be hard for any urban aficionado to not absolutely love Oklahoma City in the near future. When I came back home for Spring Break I could definitely begin to see the beginning formation of a great urban environment. 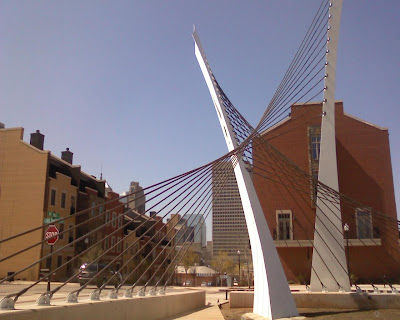 I'm currently reading "Give War a Chance," by one of my favorite authors, P.J. O'Rourke. It's incredibly funny, as I would expect from P.J., but you have to have an appreciation for mixing political theory with immature jokes..a very earnest dichotomy. The entire time I'm reading this my sensible half is recalling the Bush fiasco, while my less sensible half (I guess that's the left brain? I forget, whichever side my architectural sketches come from) wants to go and bomb Iran..kind of like John McCain.

I guess I've come to this conclusion: Bush wasn't an effective commander in chief anyway so his wars don't count (policing involves many many more troops than a quick strike attack, which Bush never understood).
Posted by NR at 10:12 PM No comments:

One of the 60 buildings that the City put on its immediate action list, which is an unsavory list of buildings that Kathy Taylor is trying to have demolished, should probably be taken off the list now. The old Abundant Life building in Uptown may soon be seeing some more good ole abundant life to it.

"Abundant Life;" there was never a more ironic name. Truly. The city chose a plan of action to target these 60+ buildings by extensively fining the owners until some move to improve the properties or stop "squatting" the property values was made--to the tune of $1,000 for each day of existence until the properties were brought up to code. Which, between now and 12/21/12 could cost an owner $1.385 million. To be fair though, as soon as the addition of Abundant Life to the list was made public in a Tulsa Whirled article, the owner (who happens to be well-heeled Tulsan David Horten) mentioned he did have plans to renovate the property into a mixed-use development.

None of us would have expected the following project on this site without demolishing the original Abundant Life building:

No city action necessary, I suppose.
Posted by NR at 9:43 PM No comments:

Now that the Downtown Airpark redevelopment is looking more solid, especially now that renderings have been released, I thought I would do a post running through the known facts about this project. Nothing is yet known about the exact starting time, although we know that the project will be coordinated with the opening of the new I-40, which makes sense--especially considering that right now Western Ave is all blocked off in the C2S area for building the new expressway.

The airpark redevelopment will be one of the projects that ensure the success of C2S by putting the area in context. "C" or the Core is definitely clear context; this will add to the "S" or Shore, which is far from being the most defined urban space. This gives definition to the area by putting something on the shore. Before we know it, we'll have gone from having a useless ditch surrounded by blight --> to having a vibrant, green riverfront lined with hotels, the Dell campus, this mixed-use project, the river-end of the new C2S park, 4 stunning contemporary boathouses, and the American Indian Cultural Center..and eventually the development of residential towers at the end of C2S. The change will be massive, like night and day. One huge accomplishment in the making of a world-class city.

The downtown airpark site is 86 acres, it will have about 1,000 residential units, a boardwalk, a "restaurant row", we know that the Santa Monica ferris wheel will go here, and will feature a pretty even mix of restaurant/retail/office/and residential space. Here are the renderings: