I meant to respond to this earlier, but my own life has been insanely busy of late. A comment on last week's Jefferson Park post read:

"If want to see the derelict properties just take that pleasent walk down Robinson and look to the east side of the street. Better yet go down 24th towards Walker to enjoy the abondon lots and section 8housing. I am not saying the neighborhood does not have potential but I would not call it the model for what OKC should be doing." 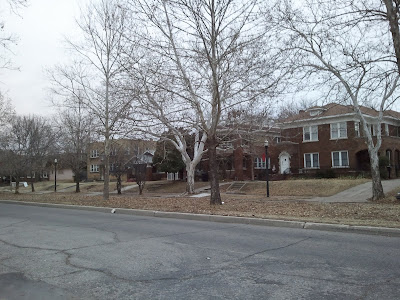 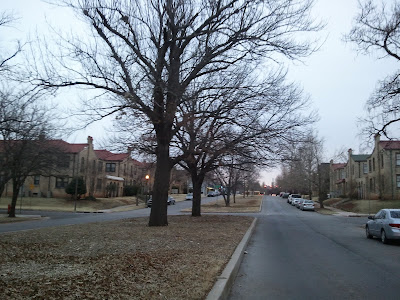 Robinson really is a pleasant walk. It has a great median, with great trees, and once the median ends on the north side of Goodholm Park, it's still a pretty decent road with a good sidewalk and lots of trees. The apartment that line both sides of Robinson south of the park are called Brentwood Terrace, and you can actually tour some of their units here. But be warned: The walls are freshly painted, rooms are well-decorated, and the flooring is fresh..in other words they are a perfect example of Jefferson Park blight. 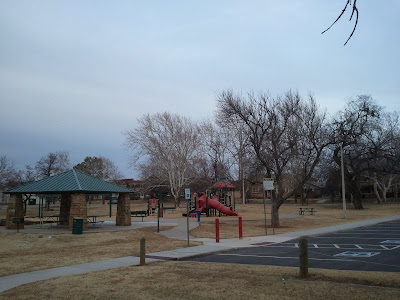 Goodholm Park really is the center of the neighborhood, especially with the way it is oriented around it. Here is the view of Robinson looking east from the park. I am a fan of these great old apartment buildings and rowhouses that line the east side of Robinson continuously all the way from 23rd to 36th. I'd hardly call them eyesores. Some aren't in great condition, some are meticulously renovated upscale properties, some are in between. The whole wall of them needs to be preserved and owners will continue to bring them up. 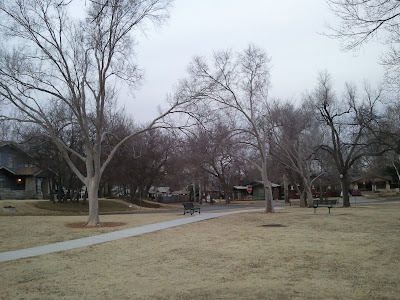 Is J. Park really a model for neighborhood redevelopment in OKC? I think that answer is undoubtedly yes. 200% yes. The simple reality is that J. Park is obviously not as nice and meticulous as Mesta Park and Heritage Hills. But the majority of OKC does not look like Heritage Hills. The majority of OKC, particularly historic parts of OKC, looks more like J. Park, or to put it in context, like J. Park did in the 80s and 90s when it had one of the highest crime rates in the entire city. How far it has come and the things it has done, which any neighborhood could do, in my opinion do make it the model neighborhood, more so than Mesta Park. That's not to say Mesta hasn't come a long ways from the 80s when most of its grand homes were foreclosed on, but Mesta is very elite and J. Park is clearly not elite, but still becoming a great neighborhood.

The JPNA and others doing a lot of good work in J. Park are doing a lot of things right. They pursued the beautification of Goodholm Park, new neighborhood signage, new construction that perfectly, matches historic period design, preservation of structurally sound historic bungalows, and the renovation of apartment buildings. It is no secret that a lot of OKC neighborhood have smaller bungalows and a few apartment buildings instead of stately mansions. JP turned that into a strength, and not a weakness.
Posted by NR at 12:47 AM