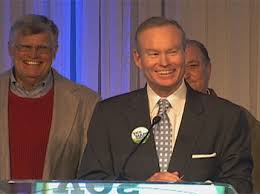 Very interesting article in the NY Times about the surge of mayoral recalls sweeping across the nation. For evidence of this close to OKC, just look at the never-ending mayor controversies in Stillwater and Tulsa. What we're seeing here in many cases is citizens loosing the ability to be rational, which does not bode well for local elected officials who are closest to the angry, irrational masses. Case in point: Daniel Varela, mayor of Livingston, Cali. was recalled and replaced by a landslide for instigating the town's first water rate increase in decades to pay for updates to water pipes that spew brownish, smelly water. Another case in point: Dayne Walling, mayor of Flint, Mi. was nearly recalled just for balancing his municipal budget amidst a fiscal shortfall much steeper than what we faced here in Oklahoma, obviously.

There has never been this many recalls in the history of the country, either. They're everywhere, other big cities that have faced them in the last months are Akron, Chattanooga, Portlant (Ore), KCMO, Toledo, and many others. More have them coming up.

Here in OKC, things are getting testy as well. We just need to stay calm and rational, which we've been good at for the last few years. Hold the politicians heels to the fire, which we've been doing. Our community, and particularly anyone who could have a recall petition against them, can ill afford shenanigans right now over the convention center site, OG+E, MAPS, and other potentially divisive issues.

Do I think progress would be stalled by a political scandal? No, I hardly doubt that. They have those all over the world, yet somehow people in Stillwater, Tulsa, Portland, Chicago, Dallas..and other cities that have had their share of recent political scandals all seem to make great municipal progress in their own ways. I just think it would be better if we avoided that. What OKC is doing requires stronger public approval than what a lot of these other cities are doing to achieve the same result, to revitalize the central city.

I think Mick Cornett has exhibited pure class about 80% of the time, and that's as good as it gets for any high-profile mayors. Even if we don't always agree with him we can appreciate his principle and appreciate his efforts to better the community. I would just say thank GOD that we don't have one of these "conservative principle" mayors who are irrationally unwilling to budge on political principles..i.e., the MAPS tax was supported by most all political moderates in OKC. I would say that today if there were a recall ballot with Cornett's name on it, I would do what I could to help defeat it. We're better with him leading and representing our city, and he's done a great job, so far.
Posted by NR at 4:38 PM