Film Row may be the next big neighborhood, with a lot of factors working in its favor. It's also still too soon to say for certain what will come of this district, but as of 2012 the prognosis is very good.

Factors working in its favor for long-term viability:
Proximity to new downtown elementary (ground should break as soon as Devon workers no longer need the site for parking), location in between the CBD and I-40 access points, proximity to Devon Tower and the Myriad Gardens, and so on. There is also a great amount of arts spill-over from the Arts District, or perhaps Film Row will become the arts district that the "Arts District" never became. There is a sense that due to the Devon and Myriad Garden projects, that major residential development will begin to transform points just SW of the CBD. 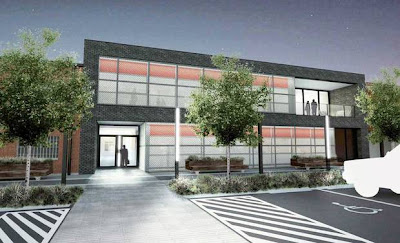 Film Row has seen a lot of positive additions in the last 3-4 years, with a new interior design shop, other creative businesses moving in including the IAO gallery, Joey's Pizza and lofts in the historic Film Exchange Building, and of course the new streetscape project that ties it all together.

The best biggest change yet for the district will be the Hart Building renovation, which will dwarf the size and scale of other projects at 40,000 sf and a $2.1 million price tag. Above (pictured) are renderings of a new "main entrance" and annex to be built south of the building's current primary frontage along Sheridan Avenue (that facade has already been cleaned up). The building will become home to the International Photography Hall of Fame and a number of companies owned by developer Chip Fudge. In all, 175 new workers will office in the Hart Building and the planned annex, which will inject Film Row with more traffic, more activity, and more vitality.

The Ice House building (the red cube at Shartel/Sheridan) across the street has been restored already, and will be home to JHBR, an architecture firm, and Slice Magazines (publishers of 9 metro-areas mags, including Downtown Monthly, Edmond Monthly, Nichols Hills News, etc).

More creative-based businesses. More mixed-use. More office workers. It's easy to see Film Row exceeding people's prior expectations even after the OCU Law School was nixed, which is what impresses me. Not only is that property still sitting there waiting to find a new use, but it also becomes more valuable real estate--although they also risk waiting too long if they don't take advantage of the synergy and redevelopment momentum that has engulfed Film Row NOW. Film Row may never be perceived better than it is now, it may fall prey to stagnation like other entertainment districts, and it may be victimized by a nearby convention center project in the future.