Brace for the 2nd wave of housing? (fingers crossed)

The first wave of new housing projects came shortly after the completion of the first MAPS package. We saw the completion of many projects, some that had been long in the works, others that were completed shortly after being envisioned. Some of these projects include the Legacy at Arts Central, the Montgomery, Park Harvey, the Seiber, the Harvey Lofts, Block 42, Central Avenue Villas, Maywood Park, the Centennial, and more. Then what's more important is that we saw more proposals coming out constantly so that it looked as if the second wave would come right after the first wave. All in all, I recall the total number of units being proposed between 2005 and 2008 being over 2,900. 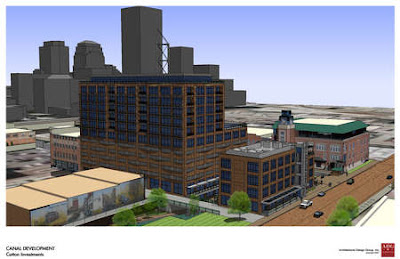 The second wave included projects that almost unanimously fell apart at once. The Cotton Exchange. Overholser Green. Bricktown Gateway. The Flatiron. Bricktown Village. The Leslie. Maywood Hall. The Heights. And many more, and that's just residential. There was maybe ONE project from this entire wave that ever came to fruition, and that was The Lofts @ Maywood Park, which has been successful in selling smaller, reasonably-priced units to a younger demographic.

Then all of a sudden there was the silence and the frustration at the silence. Voters were asked to approve $777 million in public improvements on top of billions in the forms of other public improvements being made simultaneously downtown, and the rational is that it would spur the economy by resulting in private development. If that was so, then where's the private development? The first deal that looked like it could be a spin off was OCU moving its law school downtown--a deal which fell apart over the summer as a result of OCU's change in leadership. 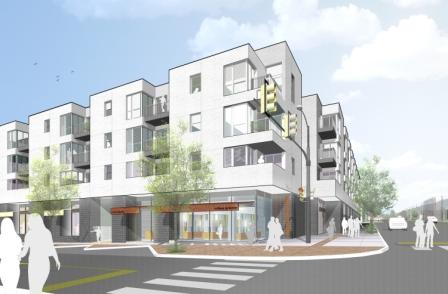 Then things started to change. Was it one project? Probably not, because we are fairly certain that the owners of the land bounded by 2nd, 3rd, Oklahoma, and Walnut have been mulling over an urban project for a while. They were already past soils testing, which occurs toward the conclusion of the planning phase, when they were ready to publicly announce their plans. But the announcement of Jim Thompson's Aloft Hotel could have possibly resulted in things heating up and interested parties suddenly getting a lot more interested. The design of the Deep Deuce Aloft Hotel, which is very unique from all the other Alofts which are still very decent, turned heads. To say the least. Could the bold statement architecture of the proposed Aloft have a hand in moving McKown forward? Could it have had a part in persuading McKown to make his project as truly urban as possible?

Regardless, I find it very hard to say that a major investment like this would be unaffected by a game-changing addition such as the Aloft.

Then add a few more folks to the picture. Dick Tanenbaum is getting back involved downtown, who is competing for the attention of OCURA on the Overholser Green site, may have a viable proposal to build something where another successful developer, Chuck Wiggin couldn't. That's 250 apartment units that Tanenbaum says he can break ground on, in January 2011 (very soon) provided OCURA makes the right decision. Add that to McKown's 227. Mickey Clagg is finally about to resume the snail's pace renovation of Hadden Hall, which will bring 18 units onto the market, on top of the 20 or so they finished earlier this year north of Saint Anthony's. There are a few more smaller single home projects, such as 626 West Main, the Waters' residence in Deep Deuce, several homes u/c in SoSA, and a few around the medical district. Clagg says he'll begin 1212 Walker in the next few months, as well. 21 units there.

So add it all up, and there's at least 550 or so units that are about be underway once again, which actually does come close to the first wave in scope, which I think justifies this as the second wave, albeit a few years in waiting, and much smaller than expected. Still, hard not to take 550 units--especially in a cycle in which only conservative, pragmatic projects are getting off of the ground. I think Tulsa is still building more units, and if not more units, certainly at least twice as many individual projects seem quite possible (OKC's count is offset by two gargantuan-sized projects, 250 and 227 units). Do we count The Hill once again, now that it seems somewhat back on track? Hard to tell. One thing's apparent, is that downtown development is possible, even in OKC. Yes, "in this economy" (if that cliche phrase hasn't been banished yet). What I mean by that is that development proposals are still gaining traction, as long as you have the money to do it and aren't relying on speculation, and it's also a great time to get involved because construction costs have gone way down for urban development (although I think to agree this is regional, and depends on how desperate local contractors are for bids, which in Oklahoma isn't very desperate lately). I also think development is very cyclical, and I can see signs where the economy in the states is improving overall, and we've all been preaching about how well positioned OKC is to make some moves once the overall economy begins to rebound.

I think that this is a bona fide wave of residential projects, several that seem to be affecting each other, all the way across downtown from Midtown to Deep Deuce. Why I chose to write about this is simple: This means we could see some more very interesting proposals very soon, as well. Have we seen pent-up demand for downtown housing fully satisfied with the 550 or so new units from the 2010 downtown housing wave? Last I checked the downtown apartment occupancy rate was still 97%, so that would probably be a..no. Who's to say that there aren't more interested parties out there waiting for the right time, who no doubt have been encouraged by the Deep Deuce and Midtown projects that could all begin within the next 4 months.
Posted by NR at 4:14 PM

I think a few developers are waiting until we find out the official route of the new streetcars. Once the route is set, I believe developers will jump on board so to speak.