One of the many things moving forward at a quick pace with Project 180 is the planning of a new public square where Bicentennial Park currently is. For the in-depth info and quotes on all that check out the recent article in the Oklahoman and here on Steve Lackmeyer's blog. He says that this image doesn't really do it justice:

Which is interesting, because the image means a lot more to me than the aerial which doesn't necessarily project how it will feel from the human-scale. Granted, it doesn't show the full picture which the aerial certainly does. But what's interesting is that I didn't even notice that the spherical water feature at the front of the steps to the Civic Center was separated from the elongated pool that makes up the majority of the new park. I actually like how you can walk around it and how it accentuates the focal point for the park, which is the steps of the Civic Center. It is also interesting how they're moving the vertical signage to the corners of the building. In the human scale image, it also almost appears as if the ground slopes downward toward the water features. Is this the case? I also presume they have decided to move the planned Compass Rose statue to the street corner just NW of the City Hall steps on Walker Ave. They will be moving the other public art and plaques currently in Bicentennial Park to other spots in the city.

Here is the aerial overview: 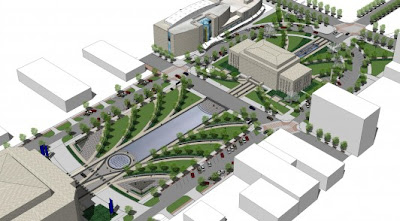 What's really interesting is that they're doing all of this for only $3.5 million, but I don't know if that includes the fundraising they alluded to or not. This space is definitely being cost-efficiently revamped..which also leads one to wonder what more could have been included in Project 180 total. I do really wish though that they would do more to reinforce Walker Ave. Like, include some hedges along it, or some benches, or something to delineate the important street cutting through the area. Speaking of Walker, I noticed that they showed cars going one-way..in the opposite direction that it currently flows. I thought they were going to make it two-way, or are they just going to reverse the one-way direction it flows in??

Ultimately, as far as this new park scheme making a difference downtown, what is going to have the biggest effect on the environment is developing the vacant lots fronting Bicentennial Park. Having those surface lots along the edge create a lot of poorly defined space that's going to be difficult to make urban regardless of how much you invest into the park's design schemes. 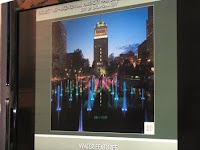 Consider the spherical water fountain in front of the elongated water feature, and the image on the right which was a part of their study session where they examined other water features they liked in similar public squares. And then check out the image on the left of that, which are lit water spouts (that dance and change colors) on the "New U" on the University of Tulsa's campus. That would be kind of cool to bring downtown, if that's similar to what we see here.
Posted by NR at 8:20 PM