Tear that sucker down

That sucker I am referring to is Downtown Oklahoma City. SandRidge Energy's application for what is being dubbed as SandRidge Commons, which includes the largest demolition downtown has seen since the 1970s, proving to the world that urban renewal and downtown demolition is still alive and well in Oklahoma City. Maybe we can also put Urban Renewal Capitol of America in with the rest of our hokie promotional pitches--that is one that there would be virtually no other contender.

Downtown Design Review voted 6-1 to approve SandRidge's application for demolition of four buildings, including the India Temple with its historic merit, and the Kermac Building with its historic merit as well as feasibility. My opinion on the DDR verdict: It was expected. Can anyone say they're surprised? Should DDR have acted differently? Probably, couldn't they have split the proposal and granted all demo's except the Kermac? Probably, but at the end of the day, it was SandRidge's bad proposal. Go check out Automobile Alley, MidTown, Core to Shore, and now especially the downtown area and can anyone TRULY say that demolition isn't becoming extremely widespread? What's more is that almost none of these buildings being demolished left and right, probably about 8 total for now, are going to be replaced with ANYTHING. So this is en effect the continued hollowing out of our downtown core. The only two that are being replaced by something else is the MidTown Medical Business District redevelopment site and one of the uglier buildings SandRidge is demo'ing.

This is an example of a dense downtown (Louisville)

This is what we've done to our downtown, and we continue to regress. We continue to lose density, create more vacant space in downtown, and tear down great historic buildings. There is at least one building with historic merit AND redevelopment potential that we are senselessly losing to SandRidge alone, not to mention the Community Foundation, and other demo's elsewhere.

This is the impact: Can you seriously tell me Downtown OKC is urban on a "Big League City" scale? How can we tout ourselves as a model of urban growth, when to be frank, we are not even close. How are we proud of Downtown OKC? The pride that we did have was mostly in our historic areas and what LITTLE density we did have, and those things continue to shrink and get smaller and smaller in our city. So what do we say next time there are comparisons made between Downtown OKC and .. Tulsa? Charlotte? Fort Worth? Kansas City? How does our downtown compare, what impression of our city will we give out of town residents, etc? The answer can be nothing short of the fact that we are modeling Downtown OKC more and more after Amarillo it seems. With all of the great stuff going on, all of the public investment going on, and all of the private investment just flowing .. we are STILL loosing density, and not gaining density. 2 steps forward, 2 steps backward.. destined to be a downtown that falls well short of the standard set by real cities, such as Tulsa, Louisville, Fort worth, Kansas City, and yes..even Charlotte, which isn't foolishly demolishing numerous buildings without replacing them. 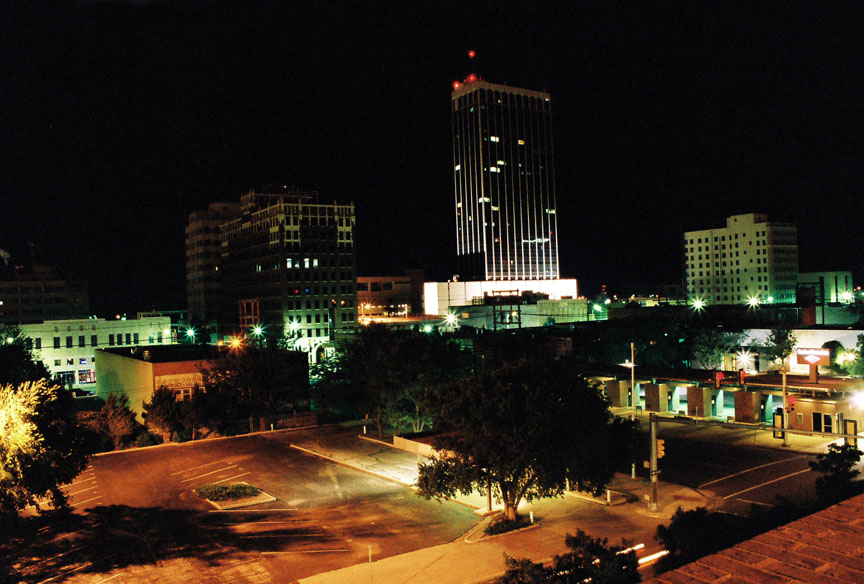 So feast your eyes: It's the downtown of the future that OKC could become..Downtown Amarillo, almost the most underwhelming "urban" environment in America (which is saying a lot in America).
Posted by NR at 3:37 PM

yeah, this bums me out too. density is the #1 issue here, and unfortunately we keep jacking it up...sigh.

I am also deeply troubled by this, I cannot believe they let this happen. I thought they were experts and all I seem to see are foolish mistakes.

it is pretty remarkable to see the aerial photos comparing OKC - Louisville. it makes me want to see how stark the difference in density appears from the air with other cities, such as austin, ft worth, little rock, tulsa, etc.. i would assume even wichita is denser, which their downtown is not at all bad.