A Night on the Town.. Pt. Deux

Oklahoma Shakespeare in the Park is performed at the Myriad Gardens' Water Stage every night, Thursday through Saturday, at 8.00 in the evening. I went and had a good time, even though it was Hamlet (which I just have a psychological block against). Two things would have made it infinitely better: if it weren't 100 degrees and humid, and if I had come for any other play. They also put on Twelfth Night, As You Like It, and George Bernard Shaw's Misalliance. Despite Hamlet, I had a really good time. It's just a nice, pleasant outing..bring a date, enjoy the breeze once the sun goes down, take in the park and skyline, and so on. For $8 bucks it isn't bad. Definitely go see it when it's cooler, and when they're performing a play you like. It runs June-September. 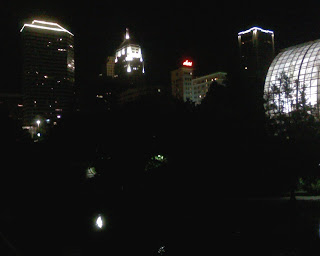 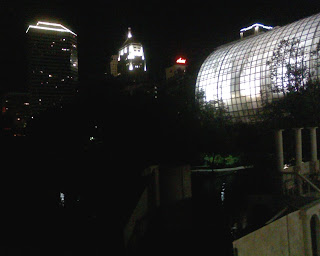 The skyline view from my seat 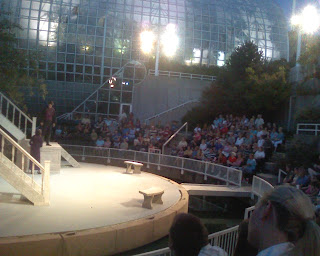 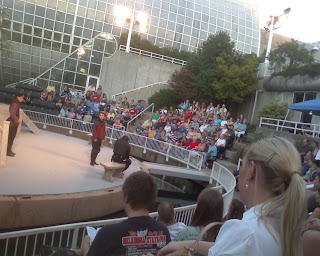 I was pretty surprised at how many people showed up. There were very few seats available, only on the edges behind the stage, so there were probably at least 200 people. I had no idea turnout would be that good for Hamlet on a hot evening, so be sure to show up early if you do go.

I think if anything proves Shakespeare's genius, is that he killed all the characters off at the end of Hamlet. That way if the production is terrible (which it usually is), there is at least always one good scene.
Posted by NR at 2:12 PM