Sometimes you hear a site proclaimed as having the most development potential in downtown. There was even a survey back in 2005 that identified the intersection that would be the most important development site in the growth of downtown. This 2005 survey, way ahead of its time, predicted that Midtown would become a resurgent hotspot area, and recognized the fantastic building stock still standing along North Broadway in A-Alley.

That site, identified as the most important piece of the puzzle for downtown redevelopment, was the intersection of NW 10th and Broadway. Imagine the potential it had; it could have been anything..a corporate headquarters, a large mixed-use development, a condo mid-rise, an NBA practice facility, and so on. What ended up going on that site, the OKC Community Foundation, while underwhelming from a development standpoint, ended up being as good as we could have hoped for. The community foundation, a respected community institution dedicated toward helping the inner city poor, is a great thing to have there..it's a shame they have to bulldoze adjacent buildings for extra parking. The EIFS entrance is tastefully done, so we can surely forgive the dreaded "fake stucco," and I think their facility fits in well with the surrounding environment, even if it isn't the pinnacle that North Broadway could have hoped for.

So since there is no condo mid-rise at NW 10th and Broadway, in the interest of jinxing another site to be underutilized, let's ponder the NEXT best development potential. And it's worth considering that things such as potential change each year as downtown continues to evolve and revitalize. I think that the progress since 2005 makes NW 10th and Broadway even more vital, especially as we anticipate that 1101 and 1100 N Broadway get restored soon.

But the progress since 2005 also makes other sites pop up on our radar. Those sites will be around the Devon Tower site, sites that connect downtown and "Core 2 Shore" taskforce lands, key sites in Bricktown and Deep Deuce, as well as the city initiative to develop a particular site in Midtown.

I like the potential of the NW 10th and Harvey-to-Hudson block to be a "perfect" development, although I don't think it's the "most vital" to the city's continued evolution. I think it is important however for Midtown, in fact, it's not hard to imagine the site's development being a prerequisite for the further development of Midtown, which is currently a collection of separate hotspots, mainly the Walker Circle area. There is also the area around the Sieber, Beatnix, Packard, Church Row, etc etc.. The one site that will connect it all, to lay the path for Midtown to evolve into the next Bricktown, will be this site that the city is taking action on. The ideal development is not anything that might be much larger than the scale of surrounding buildings, but it's important to realize that anything that doesn't completely fill the site out would be underutilization. Something very similar to Marva Ellard's former Mercy Park proposal would be ideal. Something around 4/5 stories max, but more than 2/3, and try and package as many different uses as possible. The key with residential, in order to be assured success, is to appeal to the pent-up rental demand downtown and not buy into the utter fallacy that we need more high-end for-sale units. We all fell for that one..and most of us regret it today. 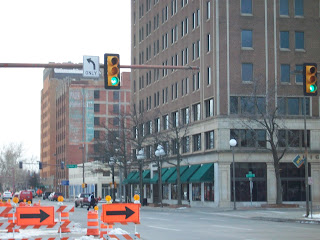 The site with the most importance, by far, for the city's continued development, given the current Devon Tower development underway--is the city block owned by Nicholas Preftakes to the west of Devon. It is safe to assume Preftakes has plans because of his history as a downtown developer, being involved in many, many past downtown projects, and now given his acquisition of this entire city block at such a convenient time. The important thing to realize here, in order for this city block to realize its full potential, is that every building must remain standing. This block already comes with an exciting stock of buildings that have a ton of potential, not to mention many unique architectural features, ranging from Art Deco to Brownstone. It's a very urban, diverse, and colorful block, not to mention a sadly underutilized block. The potential uses for these buildings, once redeveloped, should take an arts-based focus. The site is surrounded by the Myriad Gardens, Devon World Headquarters, Stage Center, the Civic Center Music Hall, the OKC Museum of Art, City Hall, and Trattoria il Centro. The uses here should reflect truly being in the center of it all. Here, an art gallery could thrive, as well as upscale restaurants, law offices, perhaps a bodega, a winebar, etc etc..

Many people have their own eye on sites in Deep Deuce and Bricktown. Because of the inorganic way in which Bricktown developed, you see vastly important sites just sitting there in the middle of Bricktown. Many of these include the festival site/parking lot across from the Brewery at Sheridan and Oklahoma, the surface parking next to Tapwerks at Sheridan and Mickey Mantle, and especially the canal-front sites along Mickey Mantle. And I could go on and on about the canal. Nevermind development sites along the east periphery of Bricktown, such as Candlewood Suites and The SteelYards, there is so much work left to be done at Bricktown's core. I know that people behind the scenes are still working diligently to attract the development Bricktown will need to be successful, and there are several deals in the works. Let's hope some of them are successful! What Bricktown needs, at this point, are rental units. It needs "rooftops" in order to pave the way for more retail, and also to take some of the seasonality out of its business cycle (which has been difficult for some "pro retailers" to grasp).
Posted by NR at 1:31 PM