Doing a world of good in the inner city

A lot of times, I seem like a pretty critical guy--especially when it comes to the Oklahoma City Urban Renewal Authority, the Downtown Design Review Committee, the Central Oklahoma Transit & Parking Authority, the Mayor's office especially, and virtually everyone that's not the Chamber of Commerce. But here's the reality guys: OCURA, DDR, and COTPA are all doing an alright job. They deserve to be questioned, and hopefully all the constructive criticism I endlessly lavish on them can help them raise the bar. Here's some examples of each agency doing a world of good in the inner city. 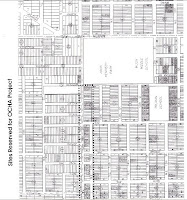 Starting with OCURA. OCURA has kind of become the whipping boy for crappy development on this blog, and the scapegoat that I like to blame everything on. That's not fair to them, and to paint an accurate reflection of the complete picture, I want to write about something REALLY, REALLY GOOD that OCURA has done, and that is where they have made a world of good in the inner NE side of OKC with the redevelopment of the JFK area. I sort of assume that this is one of the reasons why the new Douglass High School has been infinitely more successful than the new John Marshall High School gang-central, and the brand new U.S. Grant High School which is so gang-infested that OCPS decided last week to just close down. Douglass has shown how a high school and a neighborhood redevelopment project can go hand in hand and raise an entire community to a new level.

The JFK redevelopment project is a huge city area bounded by M.L.K. Ave. to Stonewall Ave, and NE Fourth St to NE Eighth St. Since 2003 the neighborhood, in the heart of a blighted ghetto area with some of the city's highest crime rates, has seen more than 100 new homes built since 2003. 20 years ago the entire area was leveled, and now OCURA is hoping to gain some neighborhood retail that people can walk to along the east end of the neighborhood. OCURA started out in the right direction by marketing the land to spec builders and giving them the land practically for free, but things really took off when they did the unconventional, and let single home buyers (rather than developers) purchase plots and build their own dream homes on the site--including that of Oklahoma Highway Patrolman Wayne Linzy, who has become a community pillar along with his big, oversized 3-car garage house. Word of mouth in the community among friends, family, and church members has turned the redevelopment project in Oklahoma City's African American community into OCURA's best mixed-use redevelopment project. Right now OCURA has agreements with builders to develop 39 more new homes in the next year. The new homes in JFK range in price from $100,000 to over $300,000, and the lower-end houses offer more value than homes in Moore or Edmond due to tax credits the builders have utilized.

In the heart of Oklahoma City's African American community, OCURA has done a world of good in the inner city that everyone in OKC can be proud of. By stepping in and facilitating the development of a true community centered around community churches, the new Douglass High School, new retail to come, and respectable friends and family who would have otherwise contributed to the inner city exodus, OCURA has helped lay a foundation for social change in the inner city. By turning the tide of failure and neglect into momentum of success and change, OCURA is truly helping strengthen an important community in OKC.

Another much maligned agency that's been doing very well lately is COTPA. And what a difference a year makes in the case of COTPA, although they've got their work cut out for them in terms of restoring their reputation. A year ago the criticism was that COTPA has ran its parking garages into the ground (to the point that they're eyesores), ran out any retail tenants, running the worst bus system in the nation, embarking on these laughable "transit" projects like the Spirit Trolleys and the Oklahoma River Cruises, and so on. COTPA was by all means an embarrassment. NOW though COTPA has gotten serious about fixing some of its down falls. There's been a lot of discussion about reforming the bus service and switching to a grid system, where routes just follow the street grid instead of complicated turns here and there. COTPA, from what I hear, is also about to renovate the Santa Fe Parking Garage, which is a start. They hope to give it a less offensive facade, and move in the Red Earth Museum to its ground floor space.

Most importantly with the new COTPA is getting serious about streetcar, since it looks as though whether or not COTPA gets it together, they will be overseeing the streetcar part of the project. But the good news is that COTPA is now taking a proactive role in the formation of the project, years after the Fixed Guideway Study was released. Unfortunately the FGS is still going to be guiding a lot of the discussion in the beginning, but it's a start nonetheless. What I'm talking about is the Let's Talk About Transit public forums. These will be a series of public forums, much like the Core 2 Shore meetings, that will shape the streetcar project. The focus will be on alternatives analysis, route selection, and educating the public..although I feel like the public is already pretty familiar with streetcar given that the item carried the MAPS 3 ballot for the most part.

The Let's Talk Transit movement is well underway, with the launching recently of the new website here. On the website you can give your input on the pending streetcar system. The 7 public meetings will take place over the course of March, April, and May. I'm also excited about these forums personally, as COTPA's PR firm contacted me about covering the meetings as an independent guest blogger. I'm excited to be able to help out however I can in contributing to a turnaround in COTPA's handling of transit. Here is the meeting schedule:

The star denotes meetings I will be covering. But I would encourage readers to make as many of these as they can and to speak up and make your ideas and concerns about transit heard. If you have a route suggestion, any opinion on streetcar, etc--it's all fair game, and that's the point of these forums. You can read about the other guest bloggers here, and also there will be an online message board soon where you can join and post freely about OKC transit. Your ideas will be heard and taken into account.

Another downtown agency that's doing a good job, although they haven't necessarily been doing a bad job in the past, is DDR--the Downtown Design Review Committee. DDR is the committee that oversees building permit applications in the city core and analyzes the design merits of each application. It's board consists of volunteers who have a high level of expertise in Downtown, including architects such as Anthony McDermid, and developers such as Chuck Ainsworth. A lot of times it seems as though crappy property owners and their works slips through the cracks in the system, but sometimes Brewer projects in the past were just given permits without even being processed. And even Brewer projects have gotten remarkably better.

DDR is also the group that recently evaluated the contentious SandRidge proposal. They evaluated the arguments from both sides and tried to make sense of it all..they decided that the SandRidge people saying the India Temple can't be saved were pretty persuasive and the urbanists saying that the KerMac Bldg can be saved were also pretty persuasive. The solution, they decided, was to defer the decision on SandRidge Commons and take a field trip to the SandRidge site and evaluate the buildings for themselves. I am also glad that I had a chance to help the urbanist camp, as a letter I emailed to Scottye Montgomery that morning was read at the meeting earlier this month.

DDR decided to defer the SandRidge decision to a special meeting April 8, 2010 at 8.30 in the Council Chambers. Props to DDR, whatever they decide to do on the matter, for doing due diligence and getting to the bottom of the issue: whether the buildings can be preserved or not. DDR has a strong track record of reinforcing historical integrity issues and their members are highly responsive to citizen letters. DDR, just like OCURA in JFK and COTPA in turning itself around in general, is a city agency that is truly doing the work of the people.
Posted by NR at 3:12 PM

Grant is not being closed down due to gang-problems. C'mon Nick, not need to exaggerate a problem such as that and take it out of context. Good lord.

Grant is being reformed due to failure to improve tests scores in four years. This triggers a federal law which requires the reform and restructuring of the school. All teachers are to be evaluated and left to the possibility of being replaced. Only 50% of the current teachers at Grant will be able to return.

While I do agree, gang problems and other distractions play a degree in that school's failure. It ultimately comes down to the discipline those kids and teachers do not execute.

Nick, I think that you are showing signs of becoming a softie.