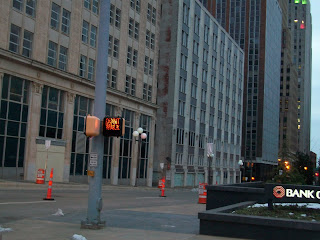 As we all know, the KerMac Building, the original headquarters of longtime Oklahoma energy giant Kerr McGee, is slated to be demolished. After they get approval from the Downtown Design Review committee and get the permit from the city, there will be no stopping this particular component of an otherwise excellent and laudable sweeping campus redevelopment scheme being proposed by SandRidge Energy.

So before that happens, let me just pose the question: Was Kerr McGee important to Oklahoma? I would love to hear the explanation from anyone who can say KMG was NOT incredibly important to Oklahoma. The fact is that throughout much of the 50s, 60s, 70s, and especially the 80s, and on until 2005 when KMG was no more--that this was a very important corporation. Look at the people who have come from this corporation, the extremely powerful U.S. Senator Robert S. Kerr; and the godfather of Downtown OKC during Urban Renewal, Dean McGee (they now give out the Dean A. McGee Award to the biggest downtown players in his honor). These two people had an incredibly lasting affect on Oklahoma City, worthy of commemorating alone. These men's dreams to form an energy giant came together in the building SandRidge now wants to tear down.

The impact of Kerr McGee, as a corporation, is also widespread and huge. For a long time, KMG was OKC's largest energy company--up until the recent breakneck ascent of Devon and Chesapeake. It employed thousands and thousands of hard-working Oklahomans and powered the OKC economy. That's the good history. There's also bad history we must not forget, such as the affair with an activist employee at their nuclear facility in Crescent, OK--Karen Silkwood.

SandRidge is new to Oklahoma. I don't want to second-guess their commitment to the community, as it turns out SandRidge's founder, Mitchell Malone, is an OSU alum who recently donated $29 million to OSU. So there's no doubting their commitment to Oklahoma, and that's great. But SandRidge, formerly known as Riata Energy, is not from OKC--it relocated here from Amarillo. They are likely familiar with the Kerr McGee story as anyone in the energy industry probably is, but preserving that history is undoubtedly not a priority for them like it should be for people who are from OKC.

Furthermore, who's to say SandRidge isn't out-right trying to root out the KMG legacy around their headquarters and replace it with SandRidge footprints? I can even see a reasonable debate for and against that, because it's certainly understandable that SandRidge DID thankfully purchase and occupy the tower when KMG left us high and dry. However on the other side, the argument that KMG history is NOT Luke Corbett history has to win at the end of the day. KMG history is OKC history, and it's about the history of the thousands of people that worked for it, people from hard working oil drillers, to people like Karen Silkwood. It's the history of Oklahoma, in a microcosm. SandRidge needs to be respectful of that, and there is no reason for them to mow down the original headquarters of Kerr McGee and replace it with nothing more than a windswept plaza to inflict SandRidge's corporate image on Robinson Avenue.

The old KerMac building also needs to be placed on the National Register of Historic Places, and this is something that SandRidge can do. If SandRidge doesn't want to do it, then a historical group in OKC can start the nomination process themselves. If the National Park Service finds that the original headquarters of Kerr McGee is significant to the legacy of this former energy giant that shaped much of Oklahoma history, then it will be placed on the Register of Historic Places. This will be a boon for the property, with a plaque out front detailing the building's importance, as well as avenues for special preservation grants that can be used to rehabilitate the building. Many of the grants would not prevent it from being rehabilitated and put back on the market as offices or apartments. There's no reason that a building with its historical importance being rooted in business function can't be commemorated by being functional once again.
Posted by NR at 4:17 PM

I've seen the building plan for the SandRidge Campus and am in the "Tower" a couple times per month. It looks like the architects took pains to protect the old Braniff building and to open a green corridor - which we badly need downtown. The building I know of as the Kerr McGee tower (and I'm 45) will still be standing when all's said and down. They're knocking down parking garages, and 1970's vintage vanilla eyesores.

If they would just preserve the KerMac the same they are going to preserve the Braniff, I would be happy. I don't want the KerMac taken down to improve "sight lines" and it's just as good as the Braniff Bldg, it just wasn't put on the National Register of Historic Places.