An idea for Film Row.. 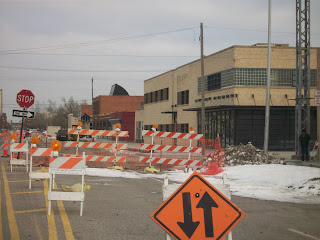 NW 9th is now most definitely on the radar, and it all began with Iguana Mexican Grill. The Spaghetti Warehouse ignited the spark that lit Bricktown on fire, although I'm not so sure Steve Lackmeyer will agree with my oversimplification of local history. MidTown became hot with McNellie's, and last time I went there they had an hour and 45 minute wait. Deep Deuce started becoming an active area with the Deep Deuce Bar & Grill, although it's been slower to get busy.

My thoughts on what is probably the "next MidTown" are that Film Row is looking really prime these days. Streetscape, two buildings renovated, some interesting existing business mix, a new art gallery with some new lofts, a fabulous new streetscape underway, lots of affect in the minds of locals as a result of all the construction, proximity to Devon Tower, and a strong group of dedicated fans. This area has all it needs to be big, and overcome any problems (like C2S, homeless, etc).

All it needs is a spark, and the time couldn't be better than now. At this point, by the time you finish scheming, develop a business plan, obtain funding and get architectural plans, get permits, and go through construction--the Film Row streetscape will be finished, and Devon Tower will be rising fast. So, what am I talking about, what is my idea?

What Film Row needs is a restaurant, and it needs to be a big hit..a hotspot, much like McNellie's, Iguana, etc. Just for fun here's my detailed proposal, without having any vested interest in Film Row aside from being a concerned onlooker. Maybe someone with more means will see this, who knows. 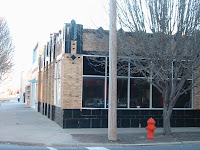 What if this building (that currently houses a cool screen printing company), or some other similar building in Film Row, could become a new restaurant with a bar. It would need to stay open until at least 1 am on weekend nights, it would need to capitalize on the area's unique history, and it would need to offer drink and food specials that attract attention, similar to Friday drinks at Iguana or Wednesday burgers at McNellie's (just $3!!). It will need a 2nd level, and it should have a rooftop bar with a skyline backdrop for the "place to be seen" in OKC. For capitalizing on the area history, howabout something like Oklawood's (or some Hollywood-spin nickname), or The Paramount (or something named after a film producer).

For food, it should be unique and stand out in order to be the next hotspot. The most unique restaurant I've ever been in was Antonio's Flying Pizza in Houston, my favorite pizzeria. At Antonio's, hence the name, the cooks were exposed to the rest of the upscale restaurant as you walk in, and they were known for throwing their dough up in the air and putting on a show. Every hour supposedly someone walking in gets hit with a raw pizza dough in the face, and their meal is free. Antonio's has been a Houston tradition since 1970, and I have many fond memories. Hopefully people will have fond memories of somewhere like McNellie's, and this restaurant--and it could be the spark that sets Film Row off.
Posted by NR at 9:36 PM

The Toy and Action Figure Museum would be perfect for Film Row.

"NW 9th is now most definitely on the radar, and it all began with Iguana Mexican Grill. The Spaghetti Warehouse ignited the spark that lit Bricktown on fire, although I'm not so sure Steve Lackmeyer will agree with my oversimplification of local history."
You've got no argument from me...
- Steve