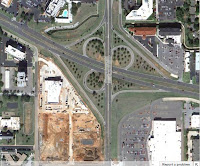 This is an interchange I was never particularly fond of, even when I knew nothing about urban planning and that highways and byways were just cool. Even in terms of accomplishing every traffic engineer's wet dream of getting CAR from Point A to Point B as fast as possible, I think it falls short. First of all, you can't go northbound on May from eastbound on the NW Expressway. Second of all, cloverleaf ramps are dangerous, especially with next to zero merging room.

Throwing the traffic engineer hat in the garbage where it belongs, and looking at this from an urban planning perspective, this intersection is just horrendous. Oh my, the wasted space. There's actually quite a bit of dense development around here. Oh my, the wasted opportunities. It's almost as if the planners of this interchange were attempting to prevent connectivity at all costs. (You can click on the image above to see the lay of the land close-up.)

Why does this even matter? Because now May & NWX is seeing a ton of development. First it was the new Super Target. Then, it was the new Dave & Buster's and other adjoining cluster of businesses across May. Now, further west just behind the new D&B, the Tiffany Apartments are getting a total makeover. New glass cladding will give a butt ugly, aging residential high-rise that was fast falling on tenement status a new lease on its own life. The $32 million redevelopment project will revitalize this complex and bring back high-rent capacity.

What if we could get a do-over and have this intersection at-grade, complete with a streetscape project, pedestrian crossings, etc. Right now, THERE'S NOT EVEN A SIDEWALK ON THE NORTHWEST EXPRESSWAY (Voice of Zeus)!!! Every time I drive down the Expressway I see several sad souls drudging it out on the grass beside the ROW, some of them even waiting for the bus to come, despite NO sidewalk. It's insane. 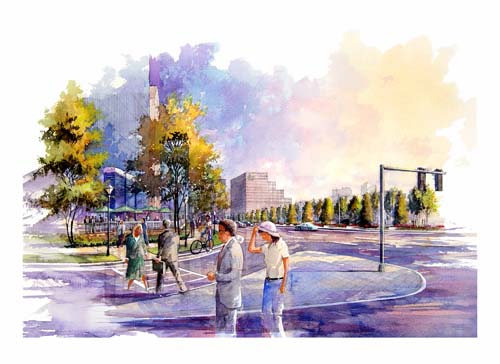 NW Expressway has not one pedestrian crosswalk and not one inch of sidewalk between Classen and where it leaves the city limits. People are killed all the time trying to cross the street. I've seen people in motorized wheelchairs maneuvering in the right hand lane (I drive it five days a week from Classen to Rockwell for my job for the past 13 years). Rumor has it that ODOT has said that the reason there are no pedestrian amenities is that they don't want people walking along the Expressway (it's a state highway). I think one of the reasons for the dismal problems with the Expway is that the businesses and other stakeholders have no organization to unite their voice so they can be heard downtown. NW Expressway is OKC"s "Main Street", and it could easily be packaged and marketed in that way. I can see some interesting possibilities for festivals up and down the Expressway on the same day. Rock at McArthur, Bluegrass at Rockwell, Country at Council, something else at Meridien, carnival rides, art. It would be a blast. A nice light rail line straight down the center to Classen and thence to downtown.