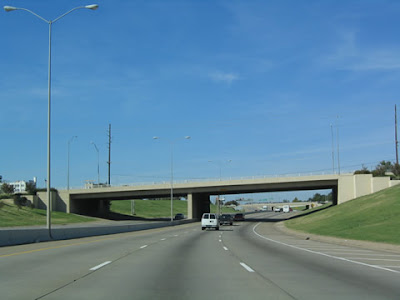 This, the decimation of the real Deep Deuce neighborhood (not just the YP housing that has exploded in recent years), is the legacy of ODOT in downtown Oklahoma City. These are the people who are designing the Boulevard, erm, I mean I-40 Business Route.

Remember that. And to hades with ODOT and their proposal to re-construct bridges over Western, Classen, Reno, and probably Exchange. If you are outraged by ODOT's latest cluster, this Facebook group, Friends for a Better Boulevard, is led by a group of activists who are organizing to save this Boulevard, erm I mean I-40 Business Route project, from epic disaster - the kind of disaster that one of us will have to write a book about in 30 years.

And next time you drive I-235 through downtown, consider the wide-sloping grassy depression that decimated dozens of blocks of Deep Deuce urban fabric that would be infinitely cooler and better than Bricktown today. That legacy could only be brought to you by ODOT - not even OKC's epic urban renewal failures can approach the level of atrocity that has been ODOT's highway planning.

There are a lot of issues constantly facing downtown. I believe that this boulevard, and the advocacy behind a proposed traffic circle instead of ODOT's horrible proposal to build an earthen ramp for a boulevard that effectively only lasts 5 blocks between there and when it goes under ramps at the BNSF tracks, has risen to the forefront as the #1 issue facing downtown right now. And City Hall and Eric Wenger are making excuses and arguing on behalf of ODOT instead of embracing a plan generated by broad-based citizen advocacy.

More on this to come in the future, as this story evolves. I'll leave you with this final thought, that for me, is the most influential reason why we need the citizen-driven traffic circle proposal over ODOT's failed highway planning: Think of the infill development that could be created around a grand traffic circle like this, wasn't this the point of having this "boulevard" in the first place?

Council, city staff, developers, activists, and citizens.. I know you're lurking on this post. At least check out the Facebook group and take it upon yourself to learn more about the effort to avert this fiasco simply out of being good, informed citizens.
Posted by NR at 10:07 PM