Stuck in traffic for a good 20 minutes on that half-mile stretch of Western Avenue between Sheridan and the new I-40, I made a mental note to myself to revisit a post that I made a while ago. Western is routinely gridlocked during this half-mile stretch, and I myself was surprised that the new I-40 project's completion has actually finally given OKC the "big league city" rush hour that we all craved. Ok, or not..

However I think that this is an opportunity, not a problem (although trying a different synchronization pattern with the lights along Western may be a good idea to ease traffic circulation). It's an opportunity because these kinds of traffic counts don't exist anywhere else downtown, and even though Western is definitely the blighted back entrance to downtown, at least with this kind of bumper-to-bumper congestion and the corridor's newfound prominence, that lends a majority opportunity for the Market Circle proposal to take advantage of.

I happen to believe (call me crazy) that development should follow traffic counts, rather than try to magically manufacture them. Western must be redeveloped, the gridlocked rush hour traffic that only exists here is screaming for it. Imagine the exposure that a business would get if somebody is stuck sitting in their car for 5 minutes just in front of that business alone. Then gets to crawl up another hundred yards after a few lights turn green, and gets stuck for another 5 minutes staring at a different business. I think this is the kind of traffic that could actually make downtown destination retail (ie., another subject we've talked to death on here and around town) very viable, although as far as that goes I am still bullish on North Broadway and the A-Alley area, especially if they can get a public parking solution.

Here's the photo from NewsOK that shows you what Western becomes every single weekday between 4:30 and 6. 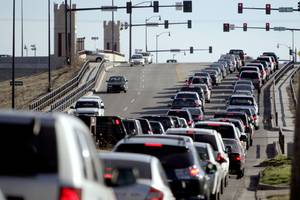 I think at a certain point, you have to stop basing your planning on how you understood downtown in 1990. Downtown has changed and evolved since then; downtown is dynamic. The new reality in 2012 is this. Take advantage of that new reality.
Posted by NR at 9:18 PM