I just want to congratulate anyone and everyone who participated in one of the Let's Talk Transit public forums and took their beliefs public. It's often so easy to sit behind a computer screen and type and keep typing until you've written a how-to essay on what you want to happen in OKC, but it's harder to make the time to meet people in person and go before a group of strangers including city leaders and state your case. Those who participated did just that and left COTPA with the impression that the community is interested and is watching. I want to thank COTPA as well for giving us the chance to do this through the public forums, for paying attention to everything we said, and also for giving me the opportunity to be the guest blogger. Without much further ado I'll go into more detail on a few key points:

Routes: We're being told that any routes we may see mapped out are only preliminary. I want streetcar planners to realize that we know these maps will be the starting point for their system planning, so we ARE going to analyze the routes. Just because they are "preliminary" doesn't mean they're only preliminary. On the Let's Talk Transit website, Walter Jenny made the following comment on a previous blog entry of mine:

- Identify the purpose of the streetcar. It's not to move people from Edmond to downtown, for example. It's to move people around downtown once they're there.

This got me thinking. I myself, and others as well, have said a LOT about the importance of connecting the Oklahoma Health Center to downtown but since stressing that importance I've been waffling on the issue. Blair Humphreys made his case in an OKC Central guest post that given the track miles we have to work with, it is not worth connecting the Health Center to downtown for the purpose of the lunch rush. Given the frequency of having streetcars run every 15 minutes and carrying less than 100 people in each run, he has a good point. Is the lunch rush the purpose for connecting both sides of I-235? Of course not, but the point remains.

One of the things I'm hearing a lot about is the lack of simplicity in any of COTPA's preliminary routes. A lot of people have suggested that the routes indicate not listening to the people who have clearly expressed a desire to see Sheridan, Walker, and Broadway. I contend however that the routes show COTPA is listening to everybody and not just the majority and the experts and FAILING to commit to ONE alignment through an area, and the complex web of streetcar they've drawn up does seem to touch virtually every street for at least one-two blocks. Someone needs to tell them it doesn't work that way. For example, you can't describe to an out-of-towner where they can catch the streetcar and where it goes without turning blue in the face. You also do need to COMMIT to a corridor and stick to those corridors instead of interweaving in order to please every proponent of every corridor. While I'm not certain of this route and while I realize it misses key areas such as Deep Deuce (although some Deep Deuce residents have told me they are used to walking), here is my proposal for SIMPLICITY:

That would be within the 7 miles we have to work with and within the physical constraints that each corridor seems to have. For instance, Sheridan can't have a double track going in both directions due to the heavy underground utilities that exist underneath the south half of the street (eastbound lanes). Other constraints involve the traffic circles, and others also involve the underpasses underneath the elevated BNSF railroad (they lack the clearance for streetcar cables). Sheridan however is by far the most popular corridor thus it NEEDS a streetcar line and more than the 3-4 blocks COTPA has proposed.

Not that the COTPA routes are all that bad. I think that the red route could be really awesome if slightly tailored, as such: 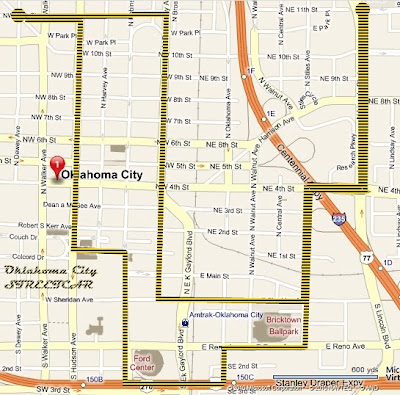 All I changed about the red route was instead of southbound cutting west to Robinson on 4th, I kept the streetcar going down Hudson until Park where it turns west to Robinson. By touching Hudson/Park you've got Arts District coverage that the streetcar didn't before. I like the idea of CBD coverage as well--most people's routes seem to touch all of the periphery neighborhoods that make up downtown but NOT the downtown skyscraper core. Just because an area doesn't currently have mixed-uses doesn't mean it lacks potential for streetcar vibrancy.

There are surely some solutions to cutting through a traffic circle as well. The OKC traffic circles have too sharp of a turning radius for a streetcar to actually navigate the curve normally but perhaps a traffic signaling system similar to crosswalk lights (embedded street lights in the pavement that flash, stopping traffic when a pedestrian pushes a button) could be used and the streetcar route could just cut through the center pavers inside the traffic circle. Granted, you would still not be able to have a streetcar curve or intersection in the middle of a traffic circle, you just might be able to transect it evenly. Maybe.

Funding: A lot has been said about the funding ever since I brought up my concern that system expansion is not feasibly going to happen any time soon due to the funding mechanism, and especially considering COTPA has yet to identify a maintenance funding mechanism for this current starter system. The belief (or illusion) shared by many behind the streetcar initiative is that future expansions will be funded by the feds who have already begun issuing streetcar grants to cities. Let me just say this: Any city that is counting on the feds for any streetcar-related capital investment is deluding itself and needs to get off its arse and fund the damn thing itself. I don't want my taxes paying for streetcar in every city when we here in Oklahoma will likely NEVER see a dime for fixed guideway transit of our own. The reality is that the feds are very strict when they evaluate transit proposals and go for bang for the buck as well as FEASIBILITY. And they have strict determining factors for feasibility which take into account density, not the potential for density.

Pedestrian malls: Another really cool idea that I think we ought to consider is integrating a streetcar corridor with a pedestrian mall. The result would be a street that incorporates numerous transit types, virtually everything except cars. It would have a bicycle lane, street vendors, a pedestrian mall, and a streetcar corridor connecting to other areas of downtown. Since Robinson is already such a screwed up one-way then two-way then one-way corridor why don't we just use Robinson for this? Between Park and Sheridan (adjacent to the Myriad Gardens) is where we could do this. An alternative is using Broadway between Sheridan and 4th, PROVIDED that SandRidge keep their buildings and builds up a Broadway streetwall. 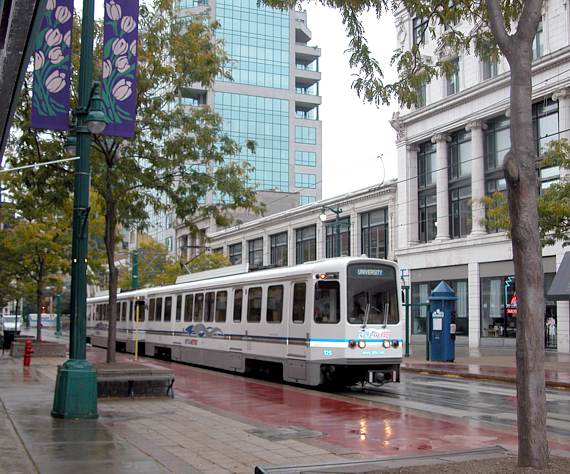 I like both of your routes, but I think they should go all the way to 13th St if possible. That street has a lot of potential for growth and expands Automobile Alley another few blocks for pedestrian development.